After a very heavy downpour upon entry to Hyde Park, you might assume there may have been a glum mood over day 2 of Wireless Festival. Nah, course not. In this review, I’ll take you through where I went, who I saw, and then finally, all the things I learnt.

Out of the whole line up, one of my favourite acts which I was still yet to see were opening the Pepsi Max stage, and despite clashing with Rita Ora, there was no way I was going to miss them.

Good choice I reckon. How they manage to create so much energy as a collective is beyond me – with decent sized mosh pits developing at 2pm. With a few new tracks sprinkled in with the 3 main singles it mEade for a very refined set. Each track sounding as huge as you’d imagine, with the closing track “Mayhem” doing what it says on the tin.

With two big albums under his belt, Professor Green now has a large catalogue of big tracks to put into a set. The classics like “I Need You Tonight“, got a great reaction, but also did the newer tracks, particularly “Remedy” – ending that track with the sublime ILS remix. Pro joked “When you drop that north of the border, they’re like ‘what’s dubstep?'”

I underestimated how much this set would mean for him it seems. After coming off stage he tweeted, “Wireless that was incredible!!! You lot were sick!!! All 40,000 of ya!”. And you can tell he means it, ‘cos he always says what he means. Such a humble performer, who always can get a crowd going wherever he wants.

After being given a very big introduction from Mistajam, Delilah had a lot to live up to. However, If you’ve ever heard her voice, you don’t even need an introduction.

I honestly think she’s the best female artist – along side Emeli Sande, that the UK has to offer. A unique style, persona and voice makes her a stunning performer. Running through her tracks, she paused to give a few small covers. A beautiful cover of James Blake’s “Limit To Your Love” and also a performance of SBTRKT’s “Wildfire”. 2 artists used this tack in some way. Delilah and Drake. One definitely did it better than the other one. (Delilah did, just in case you hadn’t picked up the point of mentioning that)

This set got very lively. Ending on “Earthquake” gives you an idea why it did too. Playing through his own terrific tracks such as “Last Time” and “Climb On Board“, mixing them up with renditions of “Frisky” and “Pass Out” – which particularly got a brilliant reception.

While being dressed ridiculously stylishly for a festival, Lab along with his band behind him put a very large amount into that set. So much so that it was the closest crowd reaction to Nero. Which when you read on, will tell you something.

After seeing an artist more than a few times you begin to wonder if seeing them live will be the same kind of vibrant, exciting experience it once was. With Example, I can’t see that happening in my lifetime.

After witnessing Elliot’s T In The Park set on BBC3, and with him saying it was one of the highlights from this year, I was nervous about how this would compare the day after. Admittedly, I couldn’t enjoy it as much due to the , sorry, the kind of people around me. The sound quality from where I was being a little poor at times, but the reactions from down the front looked very bloody lively. With the newly refurbished setlist, influenced more heavily with remixes – from the likes of Flux Pavilion and Benny Benassi, made for a very rowdy set.

I’ll get it out the way for Sheeran fans reading… There was no “Little Lady” performance.

But the set didn’t need it. If anything it would have spoilt it slightly. Mr Pane performed a set of tracks, including the Gotye remix, and “Andy Warhol“. With Bill Posters on decks behind Mikill on the very small stage, they both took it as seriously as they should have. Meaning not very serious. But what would you expect, his lyrics are comical, so much so that I actually laughed more than at the guy that ran and stacked it face first into mud – and I laughed pretty fucking hard at that.

Very different in terms of all the other artists I saw, but you know what, a good different.

Headlining the Pepsi Max/ Mistajam hosted stage, were Nero. If you’ve never seen them before, then you’ve missed out on many bruises and excessive sweating sessions. Apart from that, you’ve also missed some of the best music to go absolutely deranged too.

They had a 70 minute set, meaning a full chance to run through the majority of their number 1 album, and the classic remixes of The Streets and Plan B. And with Example and Johnny Drum Machine looking out from the side of the stage, the crowd reaction inside the tent, was one of the best I’ve possibly ever seen. Mental people developing out of every corner of the tent. Non-stop moving and constant aggression. Wasn’t for the faint hearted. Often I wonder how people can build up such an anger…

Right, I should set out that I’m not a massive Drake fan, and after seeing Nero about 10 minutes before the start of the headliner, I was even more unbothered about the upcoming set. I have nothing against Drake himself, he was very humble and interacted really well with the crowd, feeding off their enthusiasm. He also bigged up The Weeknd massively after the two collaborated on stage, as well as Nicki Minaj. But his music just doesn’t do anything for me.

The steady-to-heavy rain didn’t help my enjoyment too. Out in the open, quite far back, with a shoddy sound system (for that distance) reduced Drake, at times, to a whisper from where I was. Despite that, the tracks I did know did sound good, especially “Take Care“, furthermore, a decent enough firework set at the end did lighten the set up. He came across very well, especially when speaking to the crowd, hoever clichéd it was, he still seemed immensely humble. But I couldn’t help but think back to the Jay Z and Kanye gig at The 02. This felt like a bit of poor mans Watch The Throne.

I’m sure for all big Drake fans it was a fantastic experience. However, I’d have much preferred another set from Nero. Although I would’ve watched that boxing match between him and Chris Brown. If Wireless organisers are reading… There’s next years slot?

3. Although, rain won’t ruin everything, it will ruin your shoes, as you can see. 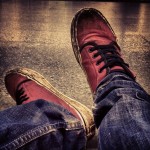 4. To last the duration of a Nero set, don’t commit yourself to early. Make sure you peak at the climax.

5. Mikill Pane is one of the UK’s best lyricists

8. Umbrellas should be banned from festivals. It’s only rain for christ sake, just put a jacket on.

9. A tent makes for a better set. No rain, and more sweat.

On a more personal note: