I’m yet to meet one single person that doesn’t enjoy any form of music. It brings out every emotion that’s in some way contained inside yourself. It can resurrect feelings you thought you’d lost a long while back, and can just as easily start up emotions – through everything from the lyrics to the production. It can break people apart, it can move people on, but it can predominately bring people together. And if we saw anything from the recent BBC 3 documentary, Project Hackney, it was the effect music can have in bringing people together.

The people in question, were young, under-educated, and had been in trouble with their previous schools, before moving to Tunmarsh School in Newham – effectively a last chance to succeed with an education. What you might assume from these kids and their schooling backgrounds would be those kinds of kids you hear about in the news, those ones many will look down upon. To some extent, you’d be right. They were caught up in trouble, either through gangs, or their own stupid mistakes, and those are facts which shouldn’t be ignored. But obviously, those facts are never forgotten, they’re made to remember their mistakes. What’s actually often ignored is the reasons behind their mistakes, why do something so stupid at a young age, that it’ll jeopardise their entire future.

A problem which was seemingly exacerbated by the riots last summer. A quote which brought some sense into the whole uprising of anger against all those involved, came from Sheldon Thomas – a former gang member, who now runs an East London mentoring scheme. He wrote in The Independent on Sunday, “If you ask how we became a society where you people think it’s okay to rob and loot, I respond how did we get to a society that cares more about shops and businesses than the lives of young people?” It was a quote brought to my attention by someone else beginning a project as a mentor for a group of kids society had already rejected, a mentor called Ben Drew, widely known as Plan B.

With support from two other big local artists, in Labrinth and Leona Lewis, Ben Drew went back to the school that turned him around, the aforementioned Tunmarsh. He introduced himself to the group of kids he’d be helping create various tracks to perform at Radio 1’s Hackney Academy, and from how Ben spoke, you could tell this meant a whole lot to him. If you ever read my article on the release of “ill Manors”, you’ll have read Ben’s quote about his plans in supporting kids from similar background to his, and this was a very large stepping stone in doing so.

Whilst on the topic of backgrounds, Ben managed to get the group speaking out, on camera, about their harrowing histories, on only the second day of filming. And well, some of these stories we’re negatively incredible. After this scene, Ben spoke outside the school about how he’d lost a mate when he was only 18, and that had hit him hard. But he was astonished to hear the tale of one kid, who’s mate had been stabbed and killed only a week before the project begun. The child telling this story was 13. Imagine being in your early days of secondary school, and one of your own friends is pointlessly murdered. There’s no way he should be made to go through events like that. Ben’s recent film, “ill Manors” strap line seems to incorporate this lifestyle: “We’re all products of our environment. Some environments are just harder to survive in.” 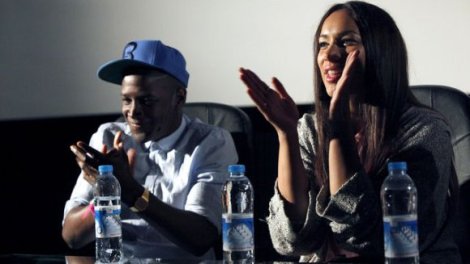 But this was why Ben, Lab and Leona were here in Tunmarsh. To inspire them, to show them that there really is a better option – and however cliched that sounds, it worked. The group were given complete guidance, advice and support through the writing, production and singing of the tracks. However, unlike in school, they were given full overriding control of their work.

Never at any point did it feel like an X-Factor show. Yes, there were problems Ben had to overcome; the jealousy from the uninvolved students, the skipping of their actual school lessons, and often the emotional sense of negativity, that if they couldn’t do it instantly, they would never get it right – effectively that they were destined to fail. This was a problem that had to be faced upfront, and Ben spoke the kids individually and as a group, about how they will be looked down upon; for the way they speak, because of their education, because of the environment they were born into. But he believed that given a chance, they could prove all those people wrong. 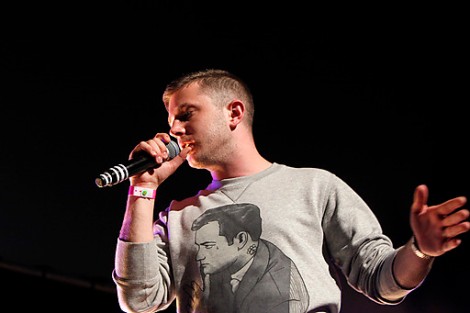 I know I haven’t spoken much about the music, certainly in relation to the backgrounds and problems Ben Drew had to merge into positivity. But that’s because without knowing about the kids, about the troubles, you wouldn’t understand what an unbelievable job he’s has done in Tunmarsh. You never did know if the performances at the climax of the show would come good, because, being honest, the kids weren’t instant stars. They should have frozen in front of a large crowd. They weren’t singer, rappers, producers, performers before this project – all of which just made the whole process harder.

It was their connection with music, and the artists supporting them, that switched the negatives into one very large positive, shown in the live performances given. Brimming with unseen confidence, gleaming with a new side to their personalities, they performed incredibly. So much so, that you forget how young they are. The music has allowed them to deal with their problems in the adult way, rather than the juvenile way before the project. Facing up, moving on, but obviously never forgetting. For me, highlighted by a heart-wrenching poem about one of the girls dad, who passed away. Leona Lewis heard it once, then created a melody to support the lyrics, and all of a sudden, a poem written when she was even younger, was turned into a song, and was then performed to a crowd she could have never imagined seeing. If that doesn’t make her dad proud, I don’t know what will.

People may have called upon Ben Drew, to back up his interview claims of trying to properly support and guide the kids he talks about. And, well, this is a big response to that. This programme wasn’t about Ben Drew, he knew that, he knew it was about the kids. Why he was there was to provide them with a life line, which was through music.

During the introduction, Ben stated, “I’m at an age now, I’ve experienced enough that I can go into that school and plant some positive seeds inside some of these kids’ heads and hopefully make them dream bigger, ‘cos the problem is, they don’t dream big enough.” Which fits in what I said earlier about the feeling of instantly failing, that they’re not supposed to succeed. Ben was there to change that attitude through music. Yes, not every kid featured will follow in the line of Ben, Lab or Leona. But this project will stay with them for the rest of their lives, and can only be a positive influence in guiding them through their lives. And obviously, I’m not saying that that’s problem solved. Just get famous local musicians in schools and turn the kids around, easy as that. It won’t solve the problems, but music can be the birth of a new beginning.

And you can watch the new beginning in full below.